Stage Notes is a weekly article on theatre, classical music and stage news, events, reviews and other relevant information.

I honestly don’t know where to start with this show. Playwright Taylor Mac’s absurd comedy is sure to be a roller coaster ride but hilarious and gripping nonetheless. You may ask yourself at the end “What just happened?”

In the program notes, Mac mentions the brutality of Shakespeare’s play Titus Andronicus which translates to “14 murders, nine of them on stage, six separated limbs, a rape, a live burial…” You get the picture. Mac’s game is all about consequences and basically who’s going to clean up this massive bloody mess.

The answer to that is Gary (Randy Pearlman), an overjoyed clown at being hired as a maid which he sees as a career move. He must work with the right expert Janice (Karen Parrish) who knows exactly how to exhume the insides of the corpses and organize the situation for maximum efficiency in cleaning up the mess before tomorrow’s inauguration.

The two bicker and joke about their approach to work, but then find common ground by poking fun at the aristocracy by donning jewelry and clothes and imagining themselves in higher social statuses.

Throughout their own revelry, they meet Carole (Brandy McClendon Kae), a midwife who had survived a stroke and the loss of a baby she was trying to save. The character also opens the show with a gory prologue.

The cast of three actors was deeply rooted in their characters, which made it both successful and palatable. The premise and setting were outrageous. So was the casting. Director Tim Johnson deftly led the cast through their mostly comedic moments, but also some impressive dramatic monologues and mime action.

While Pearlman played the titular madman of the story, it was Kae who delivered a hilarious performance halfway through. His caricature of a comedic, physical voice and timing was top-notch. Pearlman and Parrish were ideal adversaries and friends. He was lighthearted with something to say that balanced out his grumpy earnestness and the two really brought out the depth of each other’s character.

Kudos to the design team which included Justin Locklear, Aaron Johansen, Amy Poe, Claudia Jenkins Martinez and Cindy Ernst Godinez. Technically, the show was a marvel to watch thanks to them and the rest of the production team.

The backdrop was a pile of bloody corpses that hid the stairs and entrances, which added a touch of surprise throughout the show. The sound effects and lighting added incredible layers to the whole show. The biggest moment came towards the end which was a massive spectacle filled with penises, dictators and pom poms. I won’t say much more because, really, you have to see it to believe it.

Gary was many things: funny, confusing, dramatic, bizarre but for sure it was an amazing achievement for KDT in the Trinity River Arts Space.

Gary: A sequel to Titus Andronicus runs until Sunday.

The theater will air this music-themed talk and performance from its 2022 WGTA festival earlier this month. Performed by Indigenous artist Gregg Deal, the show focuses on the music that impacted his life and his healing power. Both dramatic and funny, the show follows Deal’s life from his youth to his blossoming as an artist.

The show airs until April 3. Tickets can be purchased here.

Check out the new season of productions and the new Dallas Summer Musicals name here.

everything is fine at the fire station theater 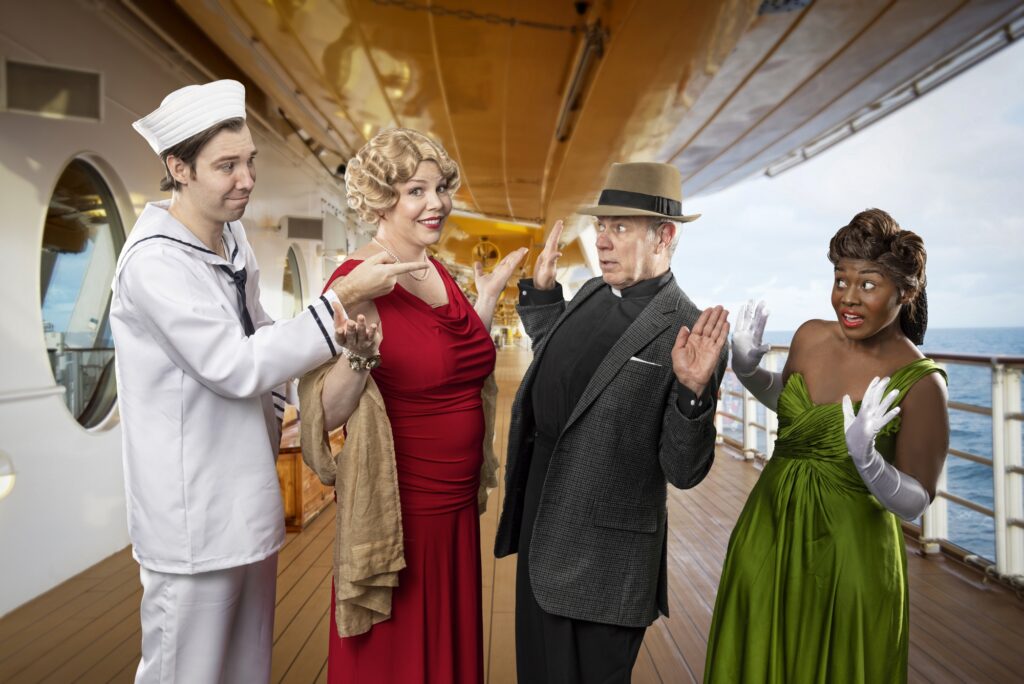 The cast of ‘Anything Goes’ at the Firehouse Theatre. (Courtesy of the fire station)

Firehouse presents this delightful onboard game as the first mainline show of the 2022 season for three weekends in April. A great classic musical with music by Cole Porter, featuring iconic show tunes such as “I Get a Kick Out of You”, “It’s De-Lovely”, “You’re the Top” and of course the song title. The show is directed by Doug Miller with musical direction by Hans Grim, choreography by Leah Flores and Megan Kelly Bates.

“I’m thrilled to direct Cole Porter’s classic musical, Everything is fine. This charming, provocative and timeless musical is exactly what we all need. I believe in the poignancy of everything is fine and his ability to bring renewed joy to audiences after difficult times,” Miller said in a press release. “Audiences will be amazed by our fearlessly talented cast and artistic team, as well as a tap number that will blow the roof off the theatre. I hope you will board with us. Have a good trip!”

The show runs from April 7-24 with a champagne reception on April 8. Tickets are available here.

The theater was to open dry powder Wednesday but issued the following statement:

As an arts organization, Second Thought is committed to providing the community with unique, intimate and, above all, safe theater experiences. While we seek to empower our artists to take creative and artistic risks, we do not believe those risks should apply to their health or that of our patrons and constituents.

To that end, we are committed to implementing rigorous security protocols to deal with the ongoing COVID-19 pandemic, which includes regular PCR testing for everyone involved in in-person rehearsals. We recently learned that these tests gave a positive result to one of our artists between rehearsals of dry powder. So, in great caution and in accordance with STT and Equity protocols, we suspended in-person rehearsals to prevent the spread of disease, which delayed the production process by seven days.

As our priority is the security and creative freedom of our artists and collaborators, we have decided to delay the opening of dry powder in a week, pushing the show’s run from April 13 to April 30.

All individual subscription and sale tickets sold for shows outside of the new air dates will be honored at the holders’ convenience. We appreciate your understanding and patience, and encourage our customers and supporters to maintain their own health and safety measures as the community continues to manage this public health issue. We will continue to do everything possible to provide unique and stimulating theater experiences to the local community and to empower our artistic collaborators in a safe and creative environment.

Feel free to hit us up on Instagram (@thinkstt) or email us at [email protected] with any questions or concerns.

Dallas Theater Center: The sound of musicFriday, April 24 at the Wyly Theatre.